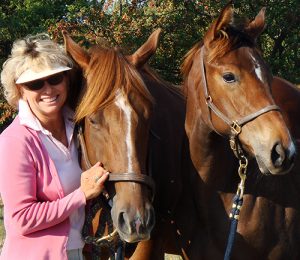 Gayle Van Leer with a mare and foal

Gayle Van Leer is a familiar figure on the California racing circuit and the sales in Kentucky and Florida, thanks both to her stint as perennial leading owner, Golden Eagle Farm’s racing manager and her tireless pursuit of the best values for her clients at public auction sales. Gayle is considered an expert in a wide range of fields, from training, to sales consignments, purchases both at auction and privately, along with general farm management practices. Known for her high standard of integrity, Gayle supports the TOBA Sales Integrity Task Force and the Code of Ethics it developed.

For John and Betty Mabee’s Golden Eagle Farm, Ms. Van Leer was responsible for the day-to-day job of coordinating the vast racing stable of 100 plus horses, which employed as many as 16 different trainers and was spread throughout not only California but also in other racing states and England. Those duties involved overall supervision of breaking and evaluation of yearlings, rehabilitation of injured horses, placing of horses with each trainer, conferring with veterinarians regarding injuries, regular physical inspections of each horse, deciding which races to enter, long range planning, pedigree research and matings, sales, etc. During her tenure, the stable’s owners received an Eclipse Award in 1991 as outstanding breeders and topped the North American owner earnings list in 1992. Constantly at the top of the owners and the breeders list over a ten year period they were honored with two more Eclipse Awards as leading breeders.

During her time with Golden Eagle Farm she also had the pleasure of being an integral part of the racing career of multiple Grade l winner, fan favorite and earner of $5,668,245, BEST PAL, along with over 80 other stakes winners.  Best Pal is pictured below with Gayle in the saddle, after being retired to his new life as a stable pony. He is is guiding million dollar earner DRAMATIC GOLD, through the paddock at the Del Mar Race Track.

Gayle honed her skills running farms and by operating as a private trainer at the San Luis Rey Training Center where she handled the horses returning from injuries and the early breaking/training of 2yr olds for leading Southern California trainers. Eclipse award winning 2-yr-old ROVING BOY was one of the many top horses to come out of her SLR operation.

Gayle has spent considerable hours volunteering her time and sharing her knowledge speaking at seminars provided for new and existing owners on how to become successful in the thoroughbred industry. She has also been active with TOBA’s Owners Committee and has been a featured speaker at TOBA seminars as well as those given by the Thoroughbred Owners of California (TOC). She is also a listed consultant in the TOBA OwnerView program.  Gayle is on the board of directors of Tranquility Farm, a charitable organization dedicated to finding new homes for retired racehorses. 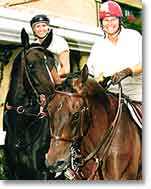 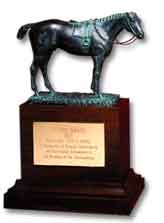 Eclipse Award Trophy, one of 3 earned by John and Betty Mabee as leading breeders 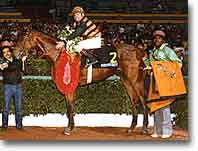 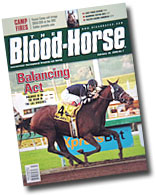