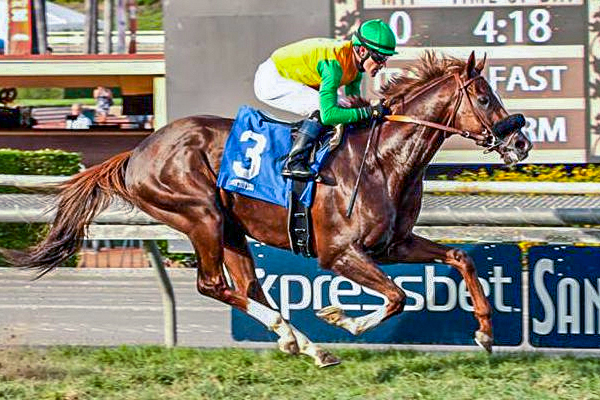 Om had one of his best years at age 7 that included a gallant runner up finish in the G1 Breeders’ Cup Turf Sprint that was run in track record time. His lifetime accomplishments include winning the G2 Del Mar Derby, the (G2) Twilight Derby, and the (G2) Mathis Brothers Mile along with the G3 Thunder Road S. His he has also placed in the in the G1 Breeder’s Cup Turf Sprint (twice), G1 Hollywood Derby, G1 Jaipur Invitational Stk, G2, City of Hope Mile S., G2 Del Mar Mile H, G3 Affirmed Stakes, G3 Arcadia Stake, G3 La Jolla Handicap and the G3 American Handicap. Om was recommended to his original trainer Dan Hendricks by GVLTS. Congratulations to both Dan and Peter Miller who trained him in his last two seasons and owner the Sareen Family Trust. He is currently standing at Stud at Harris Farms in California. His owner was profiled in the CTBA Magazine in April of 2020. Read the story.